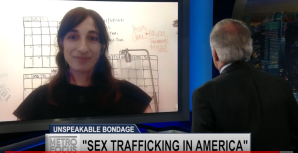 “FRONTLINE’s Sex Trafficking in America is a collection of true stories of young American women coerced into prostitution and is an insider’s view of one police unit that is committed to catching the bad actors and safeguarding communities and people.” – April Neale, Monsters and Critics, May 2019 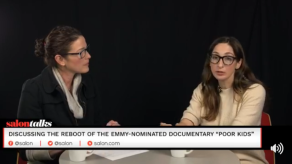 “[Poor Kids is] a portrait that’s both an indictment of a system that leaves so many hungry and a tribute to the victims.” – The Week

“This update revisits the kids at the heart of the film to see what their lives are like now, and offering a powerful, firsthand look at what poverty means to children and the country.” – The Mercury News 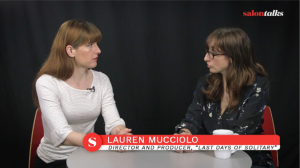 “It’s an unflinching, often harrowing look at this controversial form of punishment and at the lives of inmates as they transition out of it. The footage is often graphic and bloody but shows the reality of those kept in solitary confinement in a maximum security prison.” – Emily Burnham, The Bangor Daily News

“Psychological torture in US prisons gets a harrowing look in Dan Edge and Lauren Mucciolo’s ‘Last Days of Solitary,’ shot during the filmmakers’ three years of intimate, unprecedented access to a Maine prison, where they studied the reasons for and consequences of solitary confinement, a 200-year-old penal tradition in America.” – Peter Keough, The Boston Globe

“This documentary, filmed over three years in the segregation unit of Maine State Prison, chronicles efforts to combat psychological deterioration through improved mental health care and to create a step-down program to help inmates safely navigate the transition out of solitary and back into the prison population.” – Kathryn Shattuck, The New York Times

“Last Days of Solitary…isn’t just a film about the use of solitary confinement in our prison system. It’s also a thoughtful meditation on the psychological effects of this particular form of punishment, as well as a look at the scientific research that both underpins and undermines it.” – Ken Tucker, Yahoo! TV

PRESS FOR AFTER SOLITARY (PBS Frontline and Emblematic Group) 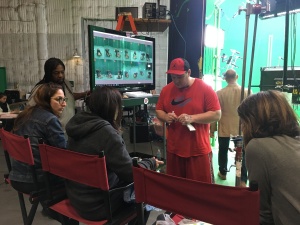 Behind the scenes at 8i studio to record an interview with Kenny Moore.

“For the Imperial Crown, we have chosen to honor a work that pushes VR storytelling through its fresh approach and clever use of room scale VR technology to elegantly and viscerally communicate a pervasive sense of confinement. This work demonstrates the potential of VR to stimulate discourse that is at once political and personally vulnerable, by creating strong connections to character, and developing a palpable sense of closeness to his plight.” – Shari Frilot, World VR Forum

“This is the beginning of a new wave of VR documentaries and journalism: to take human stories, captured with realistic environs and people, and share them in such a way that doesn’t leave us sitting with poor, Cardboard-powered 360-degree videos. Those panoramas force us to work, hunt, and peck for stories and insight. After Solitary’s directors and crew clearly worked hard to brush away as many barriers as possible to let the setting and sensation do the storytelling. ‘Show, don’t tell’ just got a lot more interesting.” – Sam Machkovech, Ars Technica

PRESS FOR BEING MORTAL (PBS Frontline) 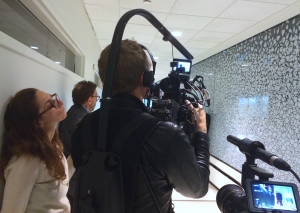 BEING MORTAL tackles with fierce insight and poignancy the way in which the medical profession treats those who are dying and how, often, it fails to give them the best options. It’s truly excellent TV. – John Doyle, The Globe & Mail

Though the emotions are raw and the subject grim, BEING MORTAL demonstrates how death intensifies rather than diminishes life’s meaning. – Peter Kough, New York Magazine (also skews on the BRILLIANT/HIGH BROW side of the Approval Matrix)

PRESS FOR LOCKED UP IN AMERICA (PBS Frontline) 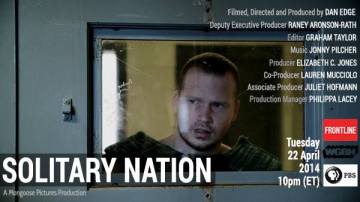 Reviews of “SOLITARY NATION”
“Whatever picture you might have in your mind of the nature of solitary confinement will be changed by this FRONTLINE documentary, and any notions you might have that it could be eliminated will be dimmed.” – Mike Hale, New York Times

“You need to watch only the first five minutes of ‘Solitary Nation,’ the first of two FRONTLINE documentaries that will air on PBS starting Tuesday. The inmates, corrections officers, and prison bureaucrats all appear stooped and burdened, tamped down, by the oppressive nature of the place in which they spend the bulk of their lives. That’s what prison is, of course, but FRONTLINE captures something deeper here.” – Andrew Cohen, The Atlantic 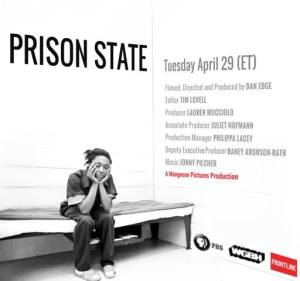 Reviews of “PRISON STATE”
“In the second part of its trenchant documentary on prisons in America, FRONTLINE shows us a side of Louisville you won’t see on Kentucky Derby Day.” – Andrew Cohen, The Atlantic

“Welcome to Beecher Terrace, a housing project in Louisville, Kentucky where nearly everyone has been to jail or prison. ‘Prison State,’ the second half of FRONTLINE’s ‘Locked Up in America’ series premiering Tuesday night on PBS, follows four residents of Beecher Terrace as they make their way in and out of the corrections system.” – Brayden Goyette, Huffington Post

“Next week, FRONTLINE continues its look behind the bars with “Prison State,” the story of mass incarceration and a system that keeps making the same mistakes again and again and keeps sending the same people back to prison.” – Bob Kerr, Providence Journal 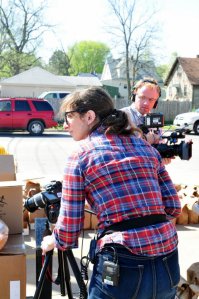 Filming at a food pantry in Moline IL for Poor Kids. March 2012.

“Jezza Neumann painted a picture of America in its worst depression since the Thirties using the finest of brushes” – Andrew Billen, The Times

“The film was a tender curation and display of all the customarily unseen – or customarily ignored, at least by the people in whose power it lies to change things – ramifications of poverty. ” – Lucy Mangan, The Guardian

“With child poverty in the US hitting record levels this documentary provides a startling view of the crisis.” – Daily Mail