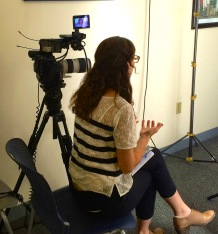 Conducting an interview for ‘Being Mortal.’ Boston, July 2013.

A native New Yorker, Lauren Mucciolo is an award-winning, independent producer based in Brooklyn, NY. Since 2012, she has worked largely with the acclaimed investigative journalism series PBS Frontline, specializing in its character-driven documentaries. Most recently, she spent three years producing “Sex Trafficking in America” (2019), a co-production with Channel 4. She was director and producer with Dan Edge on “Last Days of Solitary” (2017), which also aired on BBC Storyville. The Royal Television Society Craft Awards honored directors Lauren Mucciolo and Dan Edge with Best Director award – Factual. In addition, the 2-hour documentary received an Honorable Commendation from the Grierson Awards and was nominated for a News and Documentary Emmy, an additional Grierson, and AIB, Broadcast, Scripps Howard and Foreign Press Media awards. As part of this undertaking, Lauren also directed with Cassandra Herrman a room-scale virtual reality film, “After Solitary” (2017), which has been lauded for “pushing VR storytelling.” As one reviewer said, “‘Show, don’t tell’ just got a lot more interesting.” “After Solitary” has won numerous awards, including an Online Journalism Award and a Jury Prize at SXSW.

In 2015 Lauren was Producer for “Being Mortal”, an Emmy Award-nominated, hourlong documentary with director Tom Jennings and 2over10 Media. Based on Atul Gawande’s bestselling book, the film looks at how doctors and patients make decisions during serious illness. Without precedent, Frontline published “Being Mortal” as a multi-platform project with numerous web, radio and podcast programs accompanying the broadcast film — and Lauren produced the two web-based films “A Last Wish” and “The Conversation.”

Previously, she served as producer on Frontline’s two-part series Locked Up in America with Dan Edge and Mongoose Pictures, resulting in “Prison State” and “Solitary Nation.” These films aired on PBS Frontline in April 2014; the latter film also played in the UK on BBC2 as “Life in Solitary” in September 2014. “Solitary Nation” won the 2015 RFK Journalism Award, Domestic TV category. Lauren was also Producer of “Poor Kids” (2012 and updated in 2017), directed by Jezza Neumann for London’s True Vision Productions, which was also honored with a RFK Journalism Award. Nominated for an Emmy Award as well, the documentary premiered in the UK on BBC 2’s This World in March 2013 as “America’s Poor Kids.”

Lauren’s other producing credits include several award-winning independent films, and for series and specials at CUNY TV in New York, where she was a Producer and Director of Development for this public university TV station for 9 years. She is also an educator, having served as a film studies instructor and curriculum writer for the CUNY College Now program, and as the co-founder/co-instructor of a youth filmmaking workshop in Brooklyn that ran from 2006-2011, in partnership with Make the Road New York. Lauren is the recipient of grants from PSC-CUNY, the Brooklyn Arts Council and various New York City foundations, and she has been an invited speaking artist at numerous schools, colleges and museums.

Lauren holds an MA from The CUNY Graduate Center, where she focused on documentary film studies, and a BA in English and Communications from the University of Pennsylvania. She speaks English, Spanish and some French. In Fall 2019 she takes on the Executive Producer position at the new Howard Center for Investigative Journalism at ASU’s Cronkite School for Journalism.